Part 5 of the Dumaguete Heritage Series

In 2004, when that fateful December tsunami bore down on Indonesia and many other countries around the Indian Ocean and proceeded to exact a death toll so high that the tragedy has come to be listed as the tenth largest natural disaster in history, something of heritage proved to be an uncanny savior for many people in Simeulue, an island in Indonesia near West Aceh.

Stanley Widianto, writing for Foreign Policy, writes of it: “The cries of ‘Smong! Smong!,’ the local word for a tidal wave, rang from the coastline to the hills as soon as the shaking that preceded the disaster had finished. As they heard it, the islanders, mostly from the Nias people, began heading to the mountains, crying out ‘Smong!’ in turn as news spread.” The result: “The disaster cost more than 150,000 lives in Indonesia,” Widianto continues, “[but] only seven were lost on Simeulue—about a seventh, proportional to population, of the losses in other Indonesian areas.”

Widianto quotes a Simeulue local who explained the significance: “The islanders had heard a song about smong ever since they were small, passed down by parents and grandparents after the island was hit by a tsunami in 1907. The song’s message was, ‘When there’s a strong earthquake, followed by a low tide, don’t go near the coast to collect the fish on the shore, because there will be a [tsunami]. When that happens, run to the mountains to save yourselves. Take your kids, parents, and women to run away from the beach. Yell out, smong, smong.”

In other words, what saved the people of Simeulue was localized knowledge that sprung from their heritage and culture—a song they have been singing for close to a hundred years which gave them the instinctive edge, and which eventually led to their survival.

Localized knowledge like this is part of an intangible heritage we call “secret knowledge,” essentially these parcels of wisdom we’ve come to inherit from the generations that came before us. Some of them we have derisively called “old wives’ tales,” because they seem to always fly against knowledge we’ve learned from the present, and usually of Western import, and always coming to us packaged as “modern thinking.”

That old tale from your grandmother, for example, about eating chicken soup to help fight colds? This was something laughed at by the medical establishment as nothing more than fanciful thinking—until medical journals began suggesting that chicken soup might actually have anti-inflammatory effects that can actually help alleviate symptoms of upper respiratory tract infections.

What am I saying? That heritage is part of the story we’ve threaded as a culture and as a people, and this tapestry has sustained us for ages—and we should not be surprised that, out of the blue, it is the one thing that can save us from some impending disaster, like the people of Simeulue and their traditional tsunami song. And yet much of heritage—seen as “old” and often misunderstood because it is “intangible”—remains at risk for many communities all over the world, and Dumaguete is not immune from this lack of foresight. Sometimes the effort at conservation confounds most people. I understand this. Because how does one exactly begin, and what are the benefits?

We don’t have to look far to see some successful stories.

There is the example of Silay City, which at the height of Negros Island’s sugar bounty, had reasons to call itself “the Paris of Negros.” Before the Second World War, many of Negros Occidental’s richest landholding families—the Ledesmas, the Hofilenas, the Locsins, among many others—built lofty mansions along the narrow streets of this enclave near Bacolod. Many of these houses were built in the 1920s and 1930s, some at the turn of the last century, and all of them saw the local high society of that time enjoying the heights of their gilded age. After the war and in the aftermath of its horrors, there was considerable decline from the glittering glory that Silay once enjoyed, and many of these old houses were soon abandoned by the descendants of these families who perhaps saw better opportunities living in Manila, or better yet, abroad.

But some locals saw relevance in pursuing heritage preservation for the old homes, which were fast becoming victims to the ravages of nature, termites, and time. One of the first to recognize this was Ramon ‘Monching’ Hofileña, dubbed the “father of heritage conservation” in Silay, and who started opening his family’s ancestral house—now the Manuel Severino Hofileña Heritage House, built in 1934—in 1962, marking it as the first heritage house in the small city to be opened to the public. After a stint in New York in the 1970s, Hofileña returned home and took it upon himself to restore and protect what he deemed were the distinct cultural heritage of Negros. Soon he was organizing an annual, and long-running, cultural tour of the province, with Silay as the crown jewel of that tour. Today, Silay is officially a heritage zone as declared by the National Historical Commission of the Philippines. 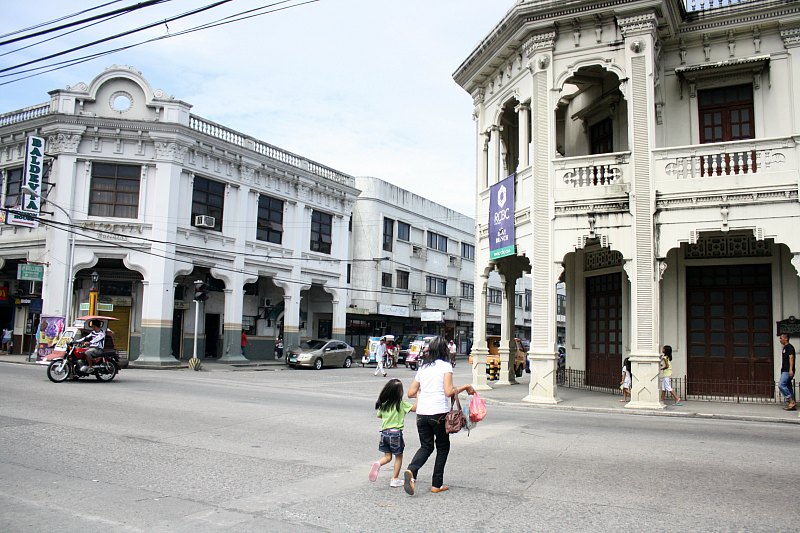 The efforts at heritage preservation in Silay was very much a grassroots movement, initiated by some of the sons and daughters of these landed families who must have thought that tearing down these grand, though decaying, structures was not exactly the right way to go—and proceeded to convince others of their class that, in fact, owning up to this legacy was perhaps the key to unlocking a treasure they still couldn’t see yet.

Today, these heritage houses, numbering about thirty, have become the engines fueling the local economy of Silay, much like Vigan. Some have become museums, others have become charming boutique hotels as well as bed-and-breakfasts, all of them embracing the past and reusing it for contemporary purposes. Only belatedly did the local government really get into the act. In 2015, the Silay mayor announced a landmark ordinance that more or less guaranteed the continuance of heritage efforts, giving the owners of heritage structures, “who properly maintain and adaptively reuse their properties,” 100-percent tax exemption.

In Cebu, on the other hand, deep in the heart of Colon, one can find the so-called “Jesuit House,” built by 18th century Jesuits stationed in Cebu, which has become a marvelously restored structure and is presently a museum, itself a well-curated and managed affair.

But the most extraordinary thing about the Jesuit House is that it is located inside a warehouse, a bodega that is still very much in use, the bustle of business coinciding perfectly with the serenity of preserving artifact! 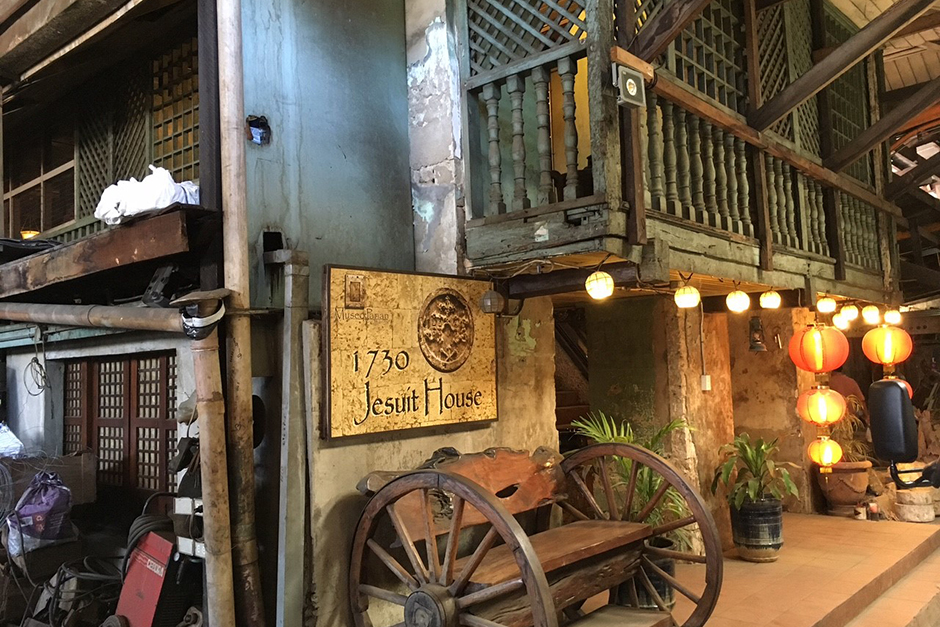 The story goes that the old priestly enclave built in 1730 was soon abandoned when the Jesuits were being suppressed in Europe in the 17th century and soon their number was expelled from Spanish territories, which included the Philippines. The house in Cebu was sold off, and changed hands so many times, each time losing much of its distinctive structures. Soon it was lost in the bowels of the warehouse constructed around it—until the father of the present owner was approached by historians, who floated the idea that what was inside his bodega was in fact structure with important architectural significance. Reportedly, the old businessman did not at all care—but his son, now the present owner, did; after the passing away of the patriarch, the son saw in it a perfect opportunity to combine business interest as well as his growing interest in heritage.

And so, the bodega still hums with activity, with workers coming in and out managing what goods were being stockpiled for the family business. And within that humming is a perfectly functioning museum, which offers scheduled tours through the fascinating labyrinth of 17th century Spanish colonial architecture in the Philippines. It also has an extensive souvenir shop that mimics how an alleyway in old Cebu might have looked like. The Jesuit House in Cebu demonstrates that heritage preservation and commerce do not necessarily cancel each other out.

But to cite an example of heritage preservation done on a mass scale in the name of urban development—and quite successfully at that—Iloilo City has become the very byword for the local heritage movement. The city is one of the oldest in the country, becoming a major trading port in the Visayas in the 19th century, and contributing much to the culture of the country. With that of course sprang architecture scattered everywhere in the metropolis that reflected the riches and conditions of the times, and today collectively they stand as heritage structures much of which Iloilo is repurposing in pursuit of a goal that “[their] past is [their] present.” 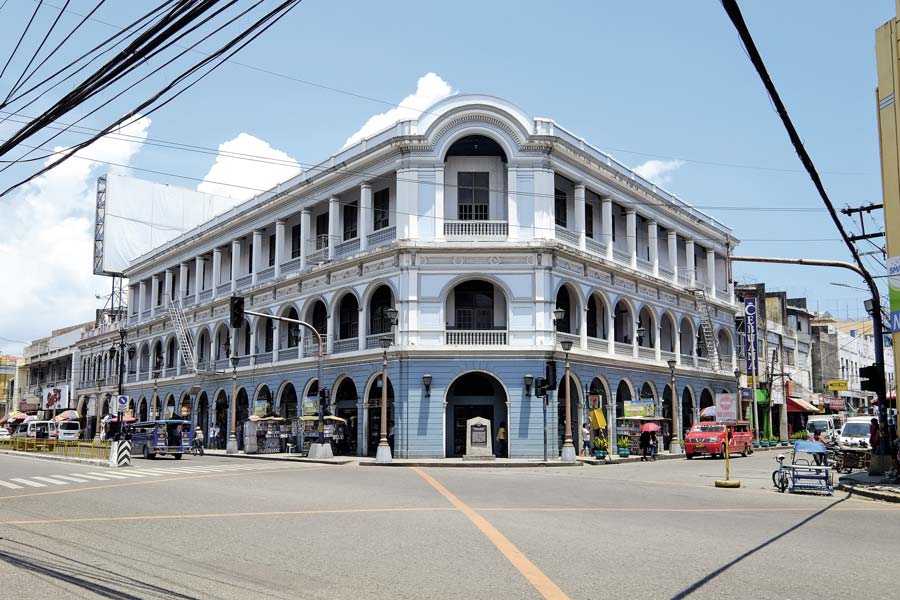 The local government has moved in decisive ways to complement the historical—even recently moving the old grandstand used for its Dinagyang Festival to a new location facing the Iloilo River to revive the old Sunburst Park, a thing of beauty. There is a concerted effort to revive the Calle Real, which collects along its stretch the best period architecture from the 1920s to the 1940s, making it a rival to Manila’s Escolta. But while Escolta seems bent on getting rid of one heritage building after another, subjecting each one to the force of the wrecking ball, Iloilo’s various conservation groups are determined to uphold what they consider as their city’s roots and birthright.

The project of rejuvenating Calle Réal hatched in 2017 included restoring 26 vintage building façades, covering the sidewalks with pavers and installing old-style street lamps, relocating sidewalk vendors to viable locations, and ‘bundling’ or relocating electric and telephone cables. Today, much of the project is a success story, prompting the National Historical Commission of the Philippines in 2018 to consider this highly urbanized city as a “model heritage zone” for the country. There are three distinct stakeholders in these three stories: the local government, the local conservationists among the citizens, and the business people and families who own much of these heritage buildings. What Silay, Cebu, and Iloilo have demonstrated is that the forging of a common interest among the three is possible, and can only be good for the city in the long run.

Isn’t it high time for Dumaguete to consider this very forging?