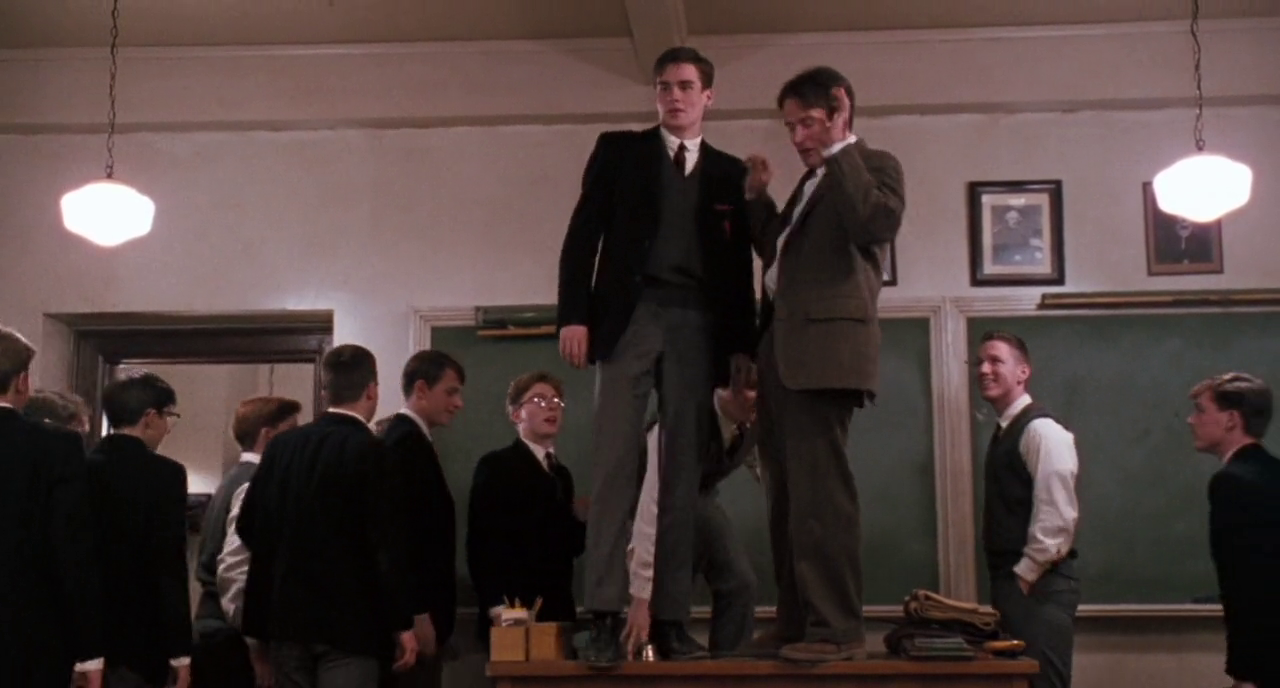 [28th of 100]. I loved this movie when it first came out in 1989. It was one of the first to stir me into the life of the cineaste. And it also awakened the nascent literary creature in me, and ripened me for what I do now, which is teach. So if this list has to be a rundown of films that impacted me, this one contains my origin story. In 1989, I was a high school freshman, just beginning to think of a life in letters, and romanticising that life as I went about penning bad poems and making haphazard attempts at fiction. And so when this movie arrived, I was more than primed for it: it caught me like the explosion of a bomb. What's not to respond to in this film? It follows a group of boys, roughly my age, who are discovering the beauty [and the perils?] of poetry, and finding a mentor in an unconventional teacher who makes them see the world anew from atop a desk, who makes them recite verse while playing football, and who earnestly reminds them to "Carpe diem! Seize the day!" I was in love, or to be more precise: the romantic boy in me fell in love. For the longest time, this movie became the benchmark with which I judged other films -- and while that is no longer true today, I still consider it a "perfect" film, flaws and all, because I remember being moved most by it. Which is why I take issue when later criticism of it has since disregarded it as something sentimental and maudlin. It wears its heart on its sleeve, yes, but I doubt it is maudlin: this is after all a film by Peter Weir who -- in films like The Truman Show, Picnic at Hanging Rock, The Mosquito Coast, and Witness -- has demonstrated that he can move us by showing us just enough. Years later, when I found myself teaching, a career I never thought I'd be doing, this was the movie that somehow validated the choice. I still sometimes make my students climb and stand on top of their monobloc chairs to make them see the "world" in a new light, or at least a different angle. I know now that life is more complex than simple declarations of Latin phrases or standing on chairs or tables, but the film is a capsule of a more innocent time, and I'm glad for the reminder once in a while. What's the film?