Part 7 of the Dumaguete Heritage Series 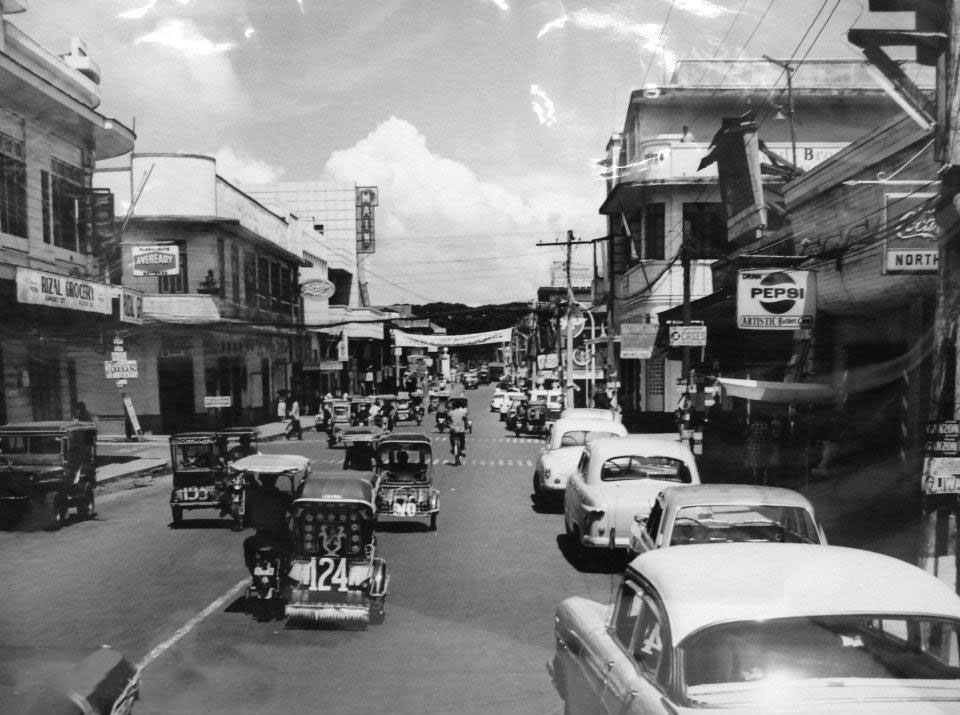 What makes Dumaguete unique? When you are asked by a visitor this question, your answer—usually haphazardly arrive at—will be a compendium of things you believe are the features that make this city inimitably itself.

“Dumaguete is the Rizal Boulevard,” you would say. Or: “The campanario.” Or: “Jo’s Chicken Inato.” Or: “Silliman University.” Or: “One big tuyok.” Or: “The Tiempos.”

It can also be about identity. “What makes it a university town?” you will be asked. Or: “Why is it the ‘city of gentle people’?” Or: “What makes it the cultural center of the south?” We do love to fling about us these tags, often using them to market ourselves and this place—but these tags actually come with history and tradition, and they were coined because they meant something. But would we know, in fact, those hidden histories and the complexities of their suggestions?

When we come to confront ourselves with these things, we are essentially doing a kind of “cultural mapping.”

There’s a reason why it’s called a map. A map is an emblem, a representation of selected characteristics of a place; the geographic kind is usually drawn on a flat surface, a cartography, presenting information about a particular place in a simple, usually visual, way—and in the process teaching us about the world it represents.

When we talk of “cultural mapping,” we are invoking exactly the same things. First, it is a process where we come to identify various heritage resources of a specific locality, usually for purposes of conservation and development. And second, it is a process where we enable ourselves to understand and share that culture, which can lead to a re-thinking of local history, and which can finally be used to promote creativity and development. And both are possible only because the “cultural map” that has been assembled eventually provides the data, the information, and the numbers—identifying resources that can be used as indicators for social development.

In other words, you simply cannot appreciate something you have not identified.

The Dumaguete Presidencia is the best example of this. For years, the city had lost track of its architectural history, and the building itself—simply because it was seen as a mere government building—withstood slapdash “renovations” that altered most of its original beauty, and through the years, it shrank into the shadows of irrelevance, even considered by so many Dumaguetnons as an ugly building surrounded by an ugly parking lot with no redeeming features.

Then somebody identified it as a building designed in 1936 by no less than Juan M. Arellano, arguably the greatest of all Filipino architects. This made it distinct from all other presidencia from around the region, and even the country. It suddenly had historical, and aesthetic, importance.

That importance has since been properly recorded and mapped, and on March 6, it will be publicly declared by no less than the National Museum of the Philippines as an “important cultural property.”

And so now we see the Presidencia with a new eye, with keener interest, seeing it finally as veritably an icon of Dumaguete City.

What a fantastic change of perception it has undergone! And such an arc we see of its changing fortunes—essentially a story of riches to rags, and back to riches again. If the Presidencia were a teleserye, we would be rooting for it as the underdog that has won. 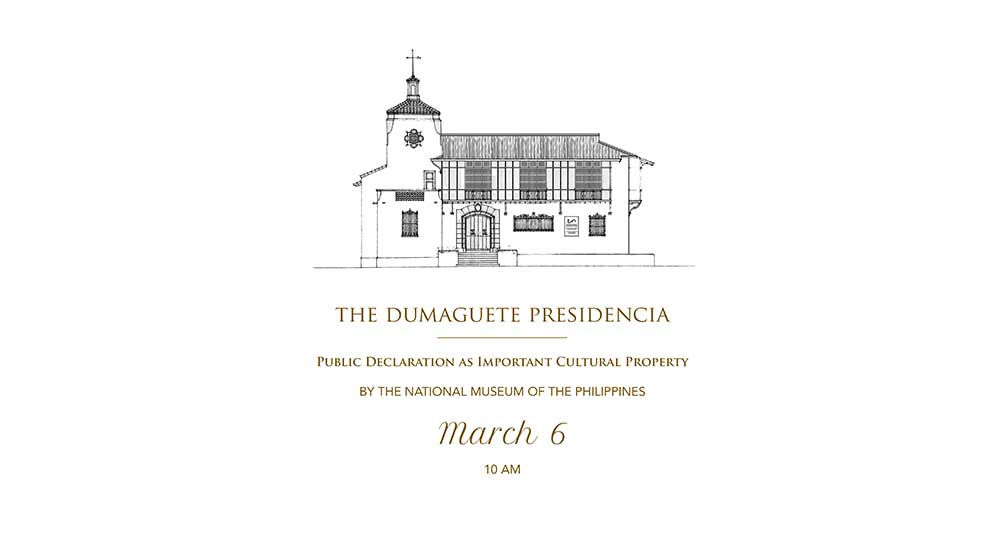 Cultural heritage is a fascinating thing to map. What is it exactly? A short way of explaining it could be this: it is anything of value from the past that provides identity to the present and inspires the future generation—which makes its importance “timeless.” The cultural heritage of a place is significant to it in terms of not only the historical, but also the architectural, the aesthetic, and the spiritual—it defines a social value encompassing all of these things. Traditionally, cultural heritage is classified into five distinct categories: intangible heritage, built heritage, natural heritage, movable heritage, and creative industries and occupations.

Intangible heritage can include a locality’s festivals, songs and music, dances, locally developed technologies, local sports and games, rituals, literature, culinary arts, language, healing arts, folk beliefs, even jokes of local vintage. Part of this is also what we call “secret knowledge,” a set of information springing from a locality’s specificity, which has helped its people deal with the way they function in their lives. We call this “mga tinuohan.”

Built heritage can include churches and mosques and other traditional places of worship, school buildings, government buildings, the local marketplaces, plazas and parks, bridges, heritage houses, even streets and roads.

Natural heritage can include plants and animals endemic to the locality, mountains and volcanoes, valleys and hills, forests and woods, rocks and minerals, caves, lakes, rivers, waterfalls, beaches, and the underwater world, even rice fields.

Movable heritage can include the paintings and other artworks of local artists, the documents and books of its notable citizens, photos and other forms of memorabilia, local costumes, local weaponry, local furniture, local equipment and machinery, local crafts, musical instruments, and work implements that are unique to the place, or at least unique in a vital way. This type of heritage also includes personalities, the notable people who call a locality home, or at least the place of their roots. This also includes religious groups that are peculiar of the locality—and in Dumaguete’s case, that could be Father Eleuterio Tropa’s sect called the Lamplighters, also infamously called Spaceship 2000, which reached a peak of popularity in the 1990s, before Tropa died in 1993.

Creative industries and occupations as heritage can be considered the practical side to cultural production, and it includes local firms and companies involved in publishing, advertising, architecture, crafts making, furniture design, fashion design, software design, film and video production, live and recorded music production, TV and radio and Internet broadcasting, performing arts and related entertainment, and avenues that sell and display visual arts and antiques, such as galleries and museums and antique shops.

Just a mere consideration of all these types of heritage will make you see that these are the things that actually make a place’s singular identity, connecting culture very significantly to the local economy.

But a cultural map also identifies the condition of each specific heritage—whether it is existing, whether it is in good condition or deteriorating, or whether it is in fact dead. Cultural mapping then is a valuable tool for identifying a community’s cultural strengths. Identifying a heritage that is “deteriorating,” for example, can only happen if people come together to do a cultural map—and properly diagnose its condition, hopefully initiating a recovery. A cultural map, in the words of journalist Glynda Descuatan, is “our own investment on our identity.” We do this, and we set a foundation for future generations to reference.

To quote Dessa Quesada-Palm, “This process poses challenges that can further the discussion about our local heritage, which can create more research about it, and which can mobilize more people to share information, as well as more people to eventually promote it.” But it is a challenge, indeed—and there’s so much work to be done, and we can only hope that local stakeholders will not get tired whenever they are presented with an opportunity to deepen the work of local heritage.

I remember Ms. Descuatan telling us once that in creating a map of local culture and heritage, we bring in “our experiences, our resources, our knowledge, and our journey as residents of Dumaguete, and how this city has influenced us in how we do things.” She said that any effort at cultural mapping is “a huge first step to integrate [heritage] into a development plan for Dumaguete,” and it can only succeed through collaboration. “The task is daunting,” she continued, “but it is an exciting task, and it can fuel our enthusiasm—but we need to realize that it requires the absolute seriousness of research, an incredible task to do so as to come up with the most credible plans.”

Today, in Dumaguete, there is a significant number of cultural workers willing to be champions of local heritage. It took a long time—“Perhaps collectively we thought, like many others, that heritage was useless amidst rapid development and a consumerist lifestyle,” City Councilor Manny Arbon has reasoned—but there is now a significant push. These cultural workers are passionate, even if they are not paid for it. [Hopefully though that can change.] But like what Ms. Descuatan has said, there is indeed a fount of enthusiasm now. People have answered the call, because they feel this has to be done today.

Mr. Arbon, in forging the resolution to create a Heritage Council in 2017, says, “Heritage is what defines the people—past and present. A growing city like ours cannot afford to forget its heritage. Hence, the need for a Heritage Council to serve as the conscience of the community. Ambitious perhaps, but necessary in these times.”

He continues: “Knowing who or what your community will make it even more cohesive in pursuing development programs. We become more collectively aware, hence we become more deliberate in our ways yet also tolerant of differences. I also believe preserving heritage makes a community proud of its beginnings and its potentials, and at the same time makes their kind of living meaningful and worth passing on.”