If there is a local visual artist that deserves fuller and more widespread recognition for the consistency he has exhibited in the name of the imaginative in the past decade, it should be Raz Salvarita—although sometimes it can be hard to pin down the singular artist, simply because he has done so much. He deserves bigger acclaim.

The Dumaguete-based painter who has familial roots in Bacolod has continued to beguile us with an assortment of passions, never an art dabbler, always laser-like in the reasons for his current pursuits—but Raz is all pluralities. He does experimental filmmaking, and has in fact been nominated for an Urian for his short film Patience, which infamously “chronicled” the languorous journey of a snail through a patch in a garden. [Recently, he is obsessed with the idea of filming Dumaguete geriatrics as they offer their memories of their youth.] He has done performance art, and in fact helped paved the way for the preservation of the forests around Lake Balinsasayao from possible encroachments by an energy company, by going around Dumaguete semi-naked, painted white from head to toe, bearing a sign that called dire attention to the environmental issue. Or photography, where he has always captured an uncanny but intimate feel of the environment—always being the gimlet-eyed naturalist. Or paintings, where his abstractions sometimes are a paean to his upcycling tendencies, but are often studies of the psyche in domestic mode, his paintings a portal to fantasies and nightmares.

It is of that latter preoccupation that delights us in his pop up exhibition, Midnight Talkers + Internal Monologues, now gracing the walls of Café Alima along Ipil Street [parallel to the Silliman Ballfield]—which, because it is a pop up—should be taken more as a promise for a larger collection deserving of full exhibition. Consisting of seven paintings, the exhibit is a kind of return to a previous style of painting he did more than a decade ago, away from the mandalas and circles and fiery vulvas of his Bali phase, and away from the found wood and textiles of his upcycling phase.

Midnight Talkers + Internal Monologues invites us to consider the playful and the playfully snide, its title immediately reminiscent of nocturnal talks with good friends which eventually embrace a healthy dose of the id expressing itself, knowing full well it is in good and forgiving company; or introspective musings done alone when the clock strikes the witching hour and we become proverbial “cats” inert in repose but always alert the subtle earthquakes of our ponderings and reveries.

I like how cats—or what look like cats—dominate many of the paintings of this series; as a cat person myself and a Leo to boot, I am fully aware of the significations of the feline: the mode, the mood, and the animal tendencies. Cats can also be monstrous, and the monstrous—existentially speaking—is what is at heart in Midnight Talkers + Internal Monologues. 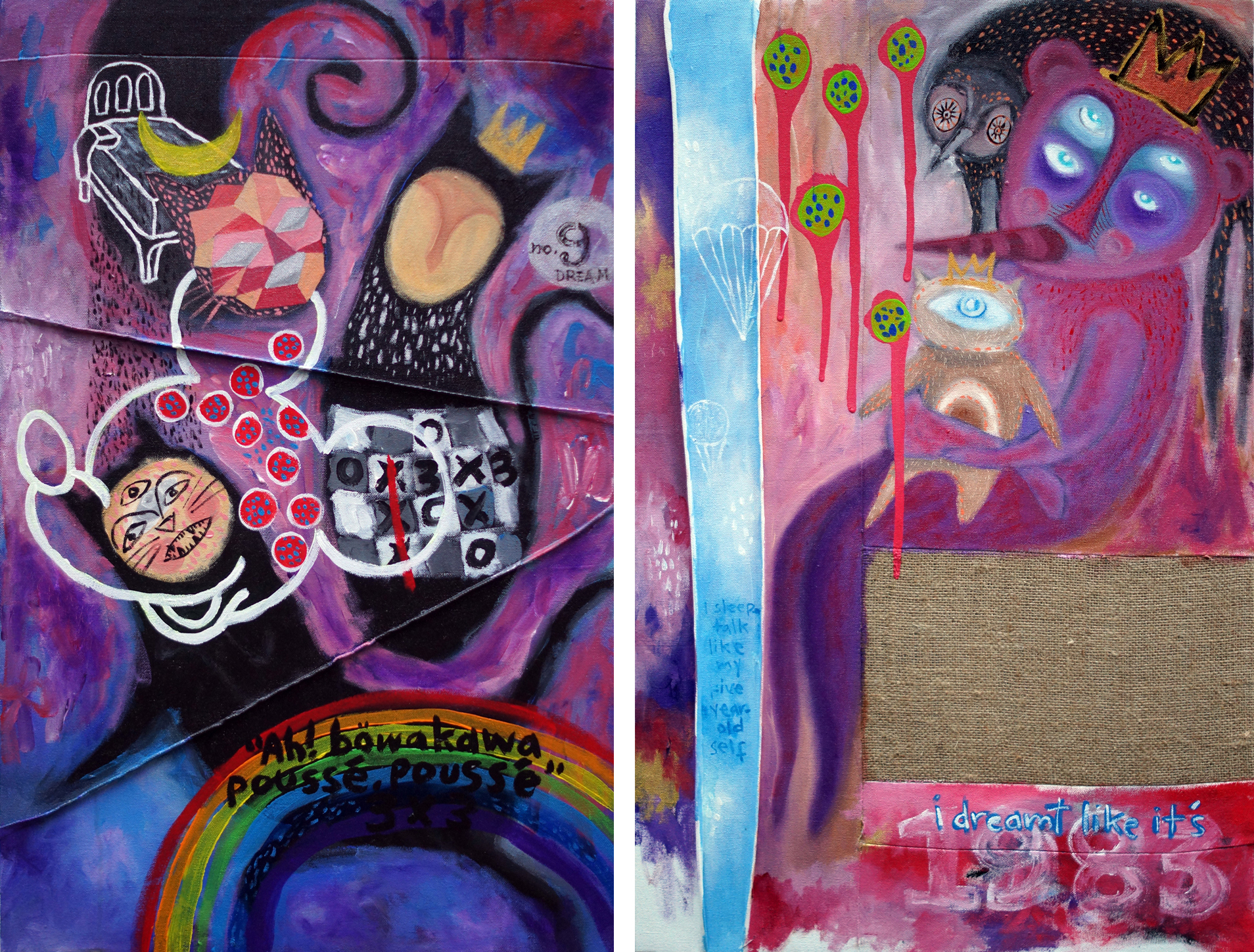 In “Wake Up Call with Three Black Cats at 4 AM,” the titular cats make dreamlike havoc of the situation—but it goes beyond the surreal depiction of interrupted sleep to bring it closer to a kind of social commentary, as we see that the cats are somehow embodiments of what can keep us awake in the full horrors of the issues at stake. I will let the viewer tease out what those are, since they are so obvious they do not warrant mentioning.

But cats are not the only animalia represented in this series. Midnight Talkers + Internal Monologues is in fact a virtual menagerie of dreamlike, animal-adjacent creatures, most of them multiple-eyed, as if inviting us to think of these figures as “all-knowing” and “all-seeing,” our troubled psyches and dreamlike stances becoming zoos of all kinds of unfiltered feelings and raw emotions. But the exhibit also gives us an autobiographical invitation—via the captions here and there on the paintings giving us slivers of understanding the artist compelled to put on canvas these startling images.

There’s the pink monkey [or bear?] of “The Calm and the Elusive Dreamers Under the Bored Pink Sky,” doing a madonna-and-child repose whose eyes hint of a world-weariness, but as underscored by captions that read, “I dreamt like it’s 1983,” and also “I sleep talk like my five year old self,” we reconsider the significance of that smaller figure in the arms of the bigger figure—depictions of longed for innocence in childhood in the arms of ennui-filled adulthood. 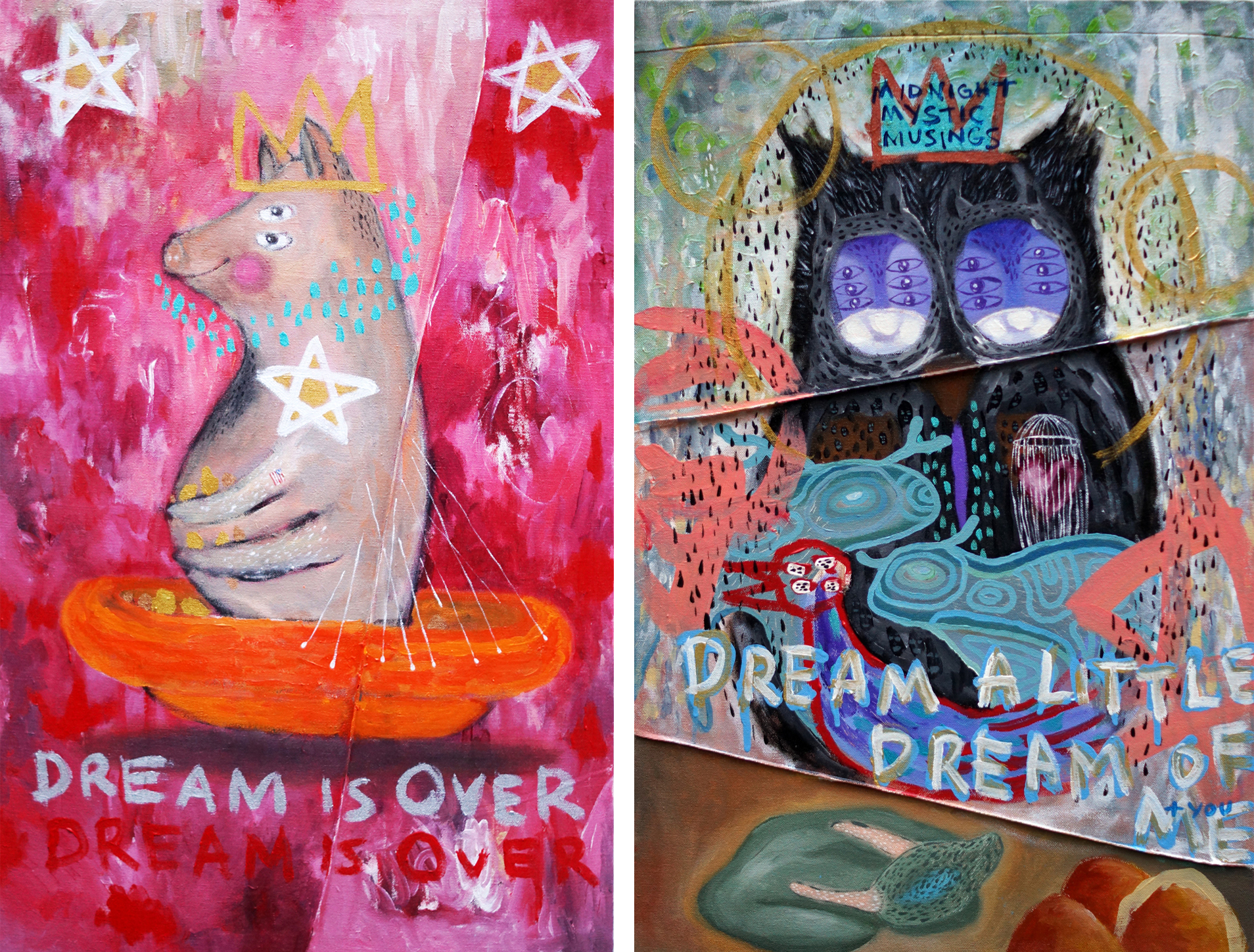 There’s the multi-armed and double-eyed pig [or dog?] of “Dream is Over—Some Beginning’s End,” which carries over the previous painting’s sense of ennui. That boredom with the world, and with life, turns a more positive note in “Midnight Mystic Musing,” however; here, an owl embraces two frogs [or salamanders?] in the bluesiness of sleep, and tells us to “dream a little dream of me, and you,” like the song, which proves this series can be quite weirdly whimsical, too, despite its surreal and often devastating searches for meaning. It’s a whimsy though that is drenched in strong Dumaguete Tanduay-tagay, allowing the images to cross the gamut of excitation and exasperation.

This singular whimsy is embodied more fully in two paintings, again showcasing some kind of animals—a porcupine? a chicken? an octopus? a whale? a carabao? does it matter?—and again drenching them in surreal landscape, enlivened by captions that are snippets of every day expressions of vexations, such as in “Brain Critters on Graveyard Shift,” where one line of scrawled text cries, “Unsa na pud?” immediately followed by “Pastilan!” and “Samoka gud” and “… Utang na sad” and “Mantiaw” and “Nia na sad” and “Mao ba?” But in “Her Song Lingers, Usahay,” they become overtures of romantic expressions—in this case, snippets of lyrics from the famous Bisaya ballad.

I’m sure there is a bigger zoo in store containing more animals from Raz Salvarita’s surreal landscape, but as a glimpse of what’s to come, Midnight Talkers + Internal Monologues are appetizers. Paintings that are foregrounded as playful, but also somehow deeply thoughtful and subversive in their existential melancholy.