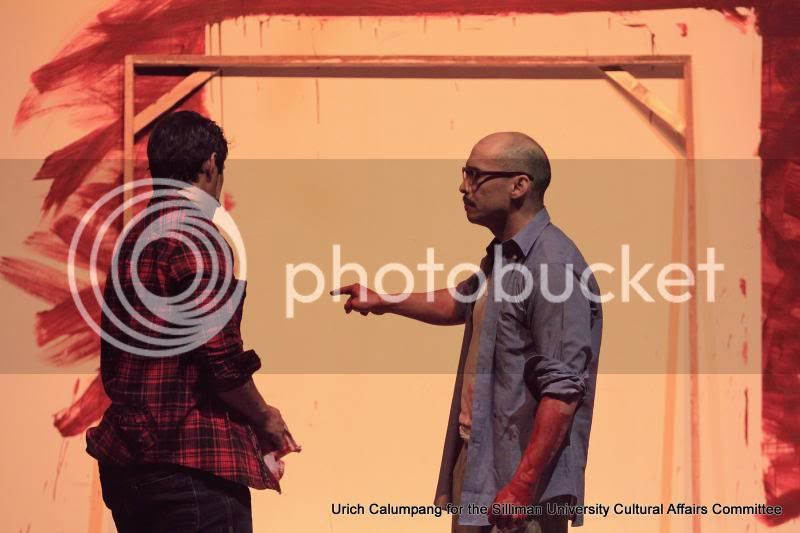 There is a line uttered by Mark Rothko (played by Bart Guingona) near the end of John Logan’s Red that gets me every time. A decisive moment has passed, and Rothko suddenly spins on his assistant Ken (played by Joaquin Valdez), points vehemently to the outside, and shouts at him: “Because your life is out there!” After a beat, he goes on to explain in a softer note what he means precisely. It is a shocking moment, because it is a mirror. Every time I see that scene, I tear up, because I think it speaks to me and my life right now, and I think to every one’s life even, especially if you’re one to pause to consider your place in the world and what it means to pursue your art or your dream. Why am I here? Why am I doing this? What exactly do I see? are all our unanswered questions this play so brazenly strips down to confront us all. 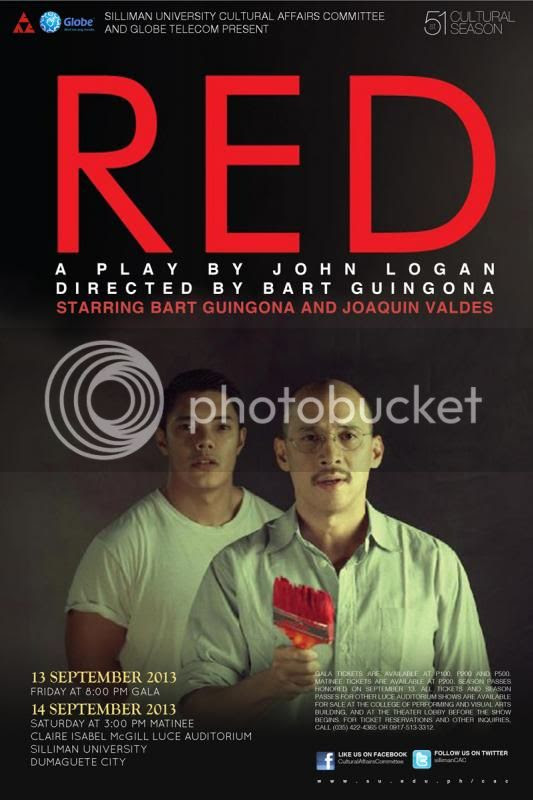 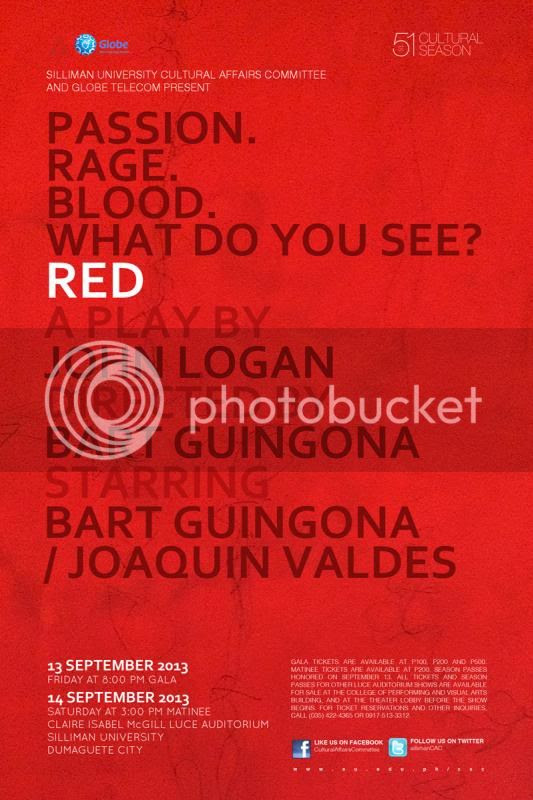 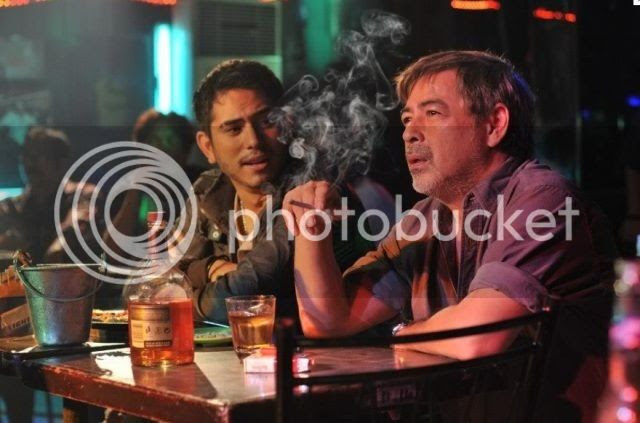 One simply has to watch Erik Matti's On the Job to believe the hype, and to take it as nothing at all like hot air: this is a very good film, and in many ways it constitutes a restoration of faith in Philippine cinema.

That's not to say we have not had any good Filipino films coming out the past few years. On the contrary, we have had a glorious surfeit of these, many of them independent efforts that by virtue of their being untethered to any studio have managed to bring something unformulaic to the table. (Although the argument can also be made, with some validity, that there is now in place a kind of formula to independent filmmaking, one trope of which was gloriously lambasted in Marlon Rivera's seminal Ang Babae sa Septic Tank.) Nonetheless, the independent film movement has been a kind of exorcism that has shaken the turgid studio system lorded over by the specter of Mother Lily and her cohorts. The past few years have seen a Filipino film industry -- perhaps very much like the rest of world cinema -- existing in a kind of schizophrenia: the commercial and the popular versus the blatantly uncommercial, although recent dialogue has risen that seeks to obliterate the divide between the two. I don't want to add to the noise of ceaseless arguments, but I would like to note only one thing: there is a different mentality of filmmaking that exists in producing fares like Sisteraka, and fares like Zombadings, no matter the temptation to blur the divide ("Zombadings is an independent comedy wanting to be mainstream!") To deny that would be foolish and myopic. The difference lies in guts, in the willingness to try the untried ("Gay zombies?"), in bloody chutzpah to carry on a production where the financial stakes are personal, in the hopefulness that audiences would find favor in watching a narrative that does not tickle their all-too-human need to see a familiar story, and with familiar faces to boot.

I am saying these because On the Job is a studio film -- a Star Cinema production -- and it's quite rare for me to be taken aback by something, enough to have me reconsider many things I thought I knew about the realities of Filipino cinema. And yet I am of an age where I still remember a Star Cinema imprint to be a signal for innovative filmmaking for the rabid moviegoer: in its earlier days, the studio had churned out the likes of Separada, Ika-11 Utos: Mahalin Mo ang Asawa Mo, Ikaw Lamang, the remake of Patayin sa Sindak si Barbara, Eskapo, Bata Bata Paano Ka Ginawa?, Dekada '70, Ligaya ang Itawag Mo sa Akin, Abot Kamay ang Pangarap, and Ang Lalake sa Buhay ni Selya, and even its more popular titles like Radio Romance, Pare Ko, and Jologs were films of some grounded genius, sort of like distillations of the best commercial sensibilities of a Regal Films picture but given the classy distinction of having been made by filmmakers with surer cinematic sensibilities. Somewhere along the way -- did things start falling apart in 1998? -- perhaps enticed by the prospects of bigger box office, or perhaps needing an assembly line of titles to satisfy a growing stable of good-looking (but often incredibly talentless) Star Circle names, Star Cinema succumbed to doling out different incarnations of Notting Hill, as Jessica Zafra once brilliantly pointed out. Sometimes, out from the dreck of titles that sounded similar to each other (Don't Give Up on Us, All About Love, Close to You, One More Try, It Takes a Man and a Woman -- what's the difference really, and can you tell which from which?), there were brilliant misfires from the formula like Bagong Buwan, Kailangan Kita, Nine Mornings, and One More Chance, but I've always suspected that these films were the cinematic equivalents of that proverbial bunch of monkeys randomly being able to type out a Shakespearean tome.

I do hope that On the Job is a game-changer -- that it makes oodles of money for the studio, if only to underline the fact that money can be made with brilliant filmmaking. Truly, this Star Cinema film, which debuted internationally at the Cannes Film Festival earlier in the year, has made good its promise to be a rollicking piece of entertainment, and it looks gorgeous, and it's gripping, and it has twists you won't see coming like a hidden balisong.

But I've always suspected Erik Matti was capable of making films like these. A visual director of the top rank, his Achilles' heel has always been story. His debut in Scorpio Nights 2 was a worthy successor to the Peque Gallaga original, but after that, it has been mostly hit or miss: he was invariably churning out films that were great to look at, but felt like nothing. I remember, for example, having such an intense love/hate stance for Sa Huling Paghihintay (2001). What a gorgeous film that was -- but what a disappointment of a story. I had loved Mano Po 2 (perhaps the best of the entire wretched franchise), and Prosti and Gagamboy were titles that reminded us that his talent was no fluke. Prosti, for one, was Matti's best excursion into Wong Kar-Wai territory, complete with the saturated shots and the slow motion set to sensuous music -- but perhaps he borrowed too much from the Chinese filmmaker's playbook, including the predilection for unshaped narrative. I've always thought that what Matti needed most was someone who knew how to write a screenplay -- and I guess he finally found that in Michiko Yamamoto, who has for so long exhibited a bewitching genius for the cinematic story, starting with Magnifico and on to Ang Pagdadalaga ni Maximo Oliveros. She has become Matti's go-to screenwriter for his latest efforts, beginning with Tiktik: The Aswang Chronicles and the short film Vesuvius, a horror film of sumptuously crafted dread. On the Job -- the immersive story of two jailed assassins and two police officers navigating the perplexing, often bloody, and treacherous maze of Filipino politics and law enforcement -- is where their collaboration has flowered the most so far.

This is the way to do a Filipino action film. (Seriously, I still need to erase the rancid memory of Manila Kingpin: The Asiong Salonga Story...) On the Job has demonstrated that good Filipino action filmmaking can be done with the intelligent intricacies of a Martin Scorsese with the Filipino sensibilities of a Gerardo de Leon, complete with homages that feel inspired rather than derivative: consider for example that small Hitchcockian blocking in the hospital sequence as police and assassin play cat and mouse with each other. One shot reminded me of a scene from Psycho, and it amazed me.

Everything about this film amazed me. It is not perfect, but On the Job is close to that.