We ended our first leg in the mountains of Canlaon, and our second leg in the heritage city of Silay via San Carlos and Cadiz. This time we were headed to white sandy beaches down south, in Sipalay. After Bacolod, we got lost for an hour in the interiors of Bago, looking for their Rizal statue [which we never found], because Google Maps, which we have christened Magta [as in "magtanong"], was leading us all over the place, going nowhere. We found our bearings again in Valladolid, which meant we skipped Pulupandan. After Kabankalan, going through the vast expanse of Ilog and Cauayan, it began to rain hard, and by the time we reached the outskirts of Sipalay, it was dark and rainy, although thank God there was no wind. We crossed the sea from Poblacion Beach to Sugar Beach, thirty minutes away, under the intense night sky, drenched to our skin because of sea and rain, staring into the dark with the hum of motorboat and the mild rocking of waves for company, our beacon the far off pinpricks of light that would prove to be our home for the night. It has been an adventure. #NegrosIslandOBT 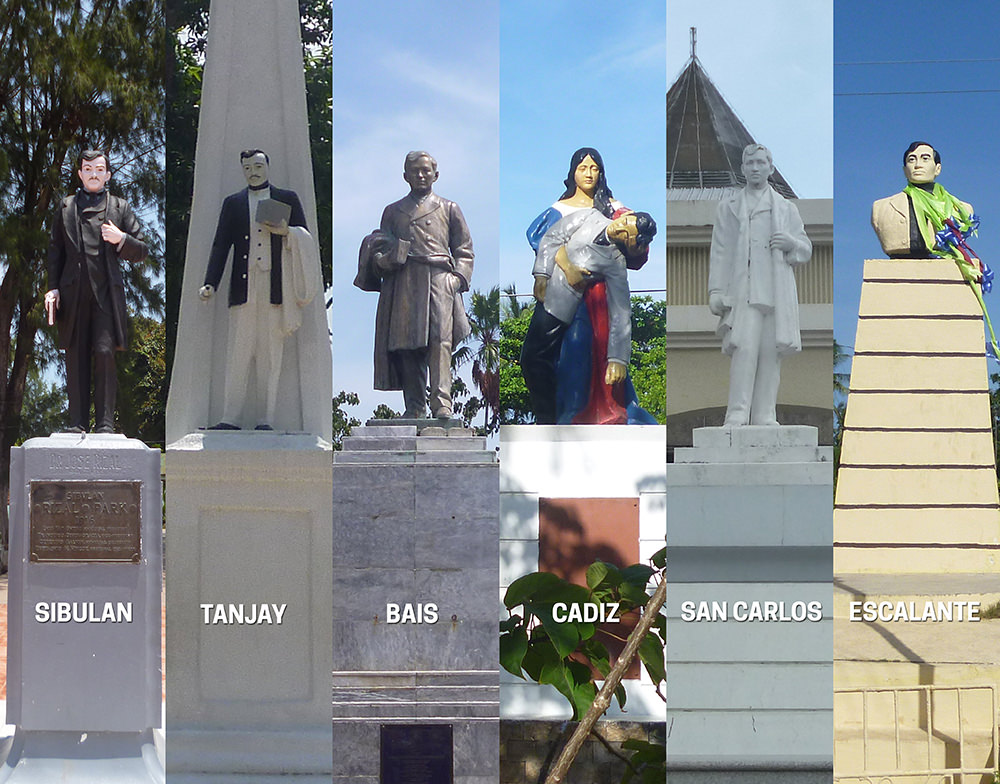 I decided to document all the Rizal monuments in Negros Island during this OBT trip. Starting in Dumaguete, going north and counter-clockwise, we've stopped in every town and city along the nautical highway [we omitted the ones inland] and took photos of the Rizal statue there. We discovered that most statues followed a template, although the execution of each one is apparently directly proportional to the wealth of the town or city. Some however are quite dramatic, like the Rizal statue in Cadiz City where the national hero is depicted in the instance of death, with Inang Bayan holding him in the manner of a Pieta. Some towns however -- like Bindoy, Canlaon, Calatrava, and Toboso -- don't seem to have Rizal statues, or have forgotten where they are. I asked one person in Toboso why they don't have a statue, and her answer was: "Kay purdoy man mi." In Escalante, their Rizal monument is located in Baranggay Rizal, 15 kilometers away from the city proper -- an instance of us looking for a needle in a haystack. We're still in Silay right now, on the way to Sipalay next.

We basically hopscotched on the airport runway when we landed, the plane's wheels screeching on the tarmac for a few seconds -- I could smell rubber burning -- and then the plane was off into the air again, circling Dumaguete for another attempt at landing. The captain then spoke through the PA, something about a safety maneuver, something about the instruments giving off warning signs. People at the airport later was telling me they had never seen anything like it, the plane bopping like that on the middle of the runway. When it was happening however, it took me a few seconds to realize we were not landing. But I felt unusually calm, and I felt a sudden conviction that, if I were to get out of that cabin with another chance at life, the noise in life wouldn't matter. There's only work and integrity, and friends and family.

(Also that I had to take care of myself.)